The Lamborghini Gallardo (/ɡuyˈaɾdo/) is a sports car built by Lamborghini. The Gallardo is Lamborghini's most-produced model to date, with over 5000 on first three years of production .[1] Each car costs about $180,000 to $210,000. The car is named after a famous breed of fighting bull. The Spanish word gallardo (/ɡaˈʎaɾðo/) translates into "gallant," and from Italian into "striking". 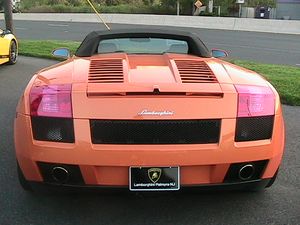 The Gallardo was designed as a competitor to the Ferrari 360, and now competes with its replacement, the Ferrari F430. The Gallardo has a rear-biased all-wheel drive system which differentiates it from its rear-wheel drive competitors. Lamborghini's parent company Audi[2] is renowned for its quattro 4WD system, however Lamborghini uses a system of its own.

Unlike the Countach, Diablo, and Murciélago models, the Gallardo does not have scissor doors.

The Gallardo was designed by Luc Donckerwolke, who won the 2003 red dot design award for the design of both the 2004 Gallardo and 2002 Murciélago.

The Gallardo offers two choices of transmissions, a conventional (H-Box) six-speed manual transmission, and an advanced six-speed electro-hydraulically controlled 'semi-automatic single-clutch sequential manual', which Lamborghini abbreviates to "E-gear". The "E-gear" allows the driver to make shifts much faster than a manual transmission would. The driver shifts up and down via paddles behind the steering wheel, and does not and cannot manually actuate the clutch.

The Audi R8 sports car, launched in early 2007, is based on the Gallardo platform, and uses a 4.2 litre V8 in place of the Gallardo's V10 to avoid competing directly with the Gallardo.

For the 2008 model year, an onboard computer, iPod connectivity with USB, heated mirrors, Q-citura stitching that originally could only be found on the Nera model, and a beige soft-top on the Spyder, were added to the Gallardo.[3] 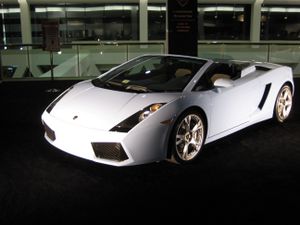 The production spyder model of the Gallardo was unveiled at the Los Angeles Auto Show in January 2006. It is considered by the company to be an entirely new model, with 382 kilowatts (Template:Convert/PS hp) and a lower-ratio six-speed manual transmission. The soft top is fully retractable.

Aerosmith drummer Joey Kramer was the first person in North America to take delivery of the Gallardo Spyder.

Top Gear presenter Jeremy Clarkson announced on 18 February 2007 that he had bought a Gallardo Spyder, replacing his Ford GT.

In late 2005, the Gallardo SE (Special Edition) was introduced. The SE is distinguished from the regular Gallardo externally by having a black-roofed two-tone color scheme as well as specially-designed "Callisto" rims shod with Pirelli tires. Note that the Gallardo SE could only be ordered in a very small selection of exterior colors: two grey shades as well as white (Balloon white), yellow (Giallo Midas), Orange (Arancio Borealis) and green (Verde Ithaca) 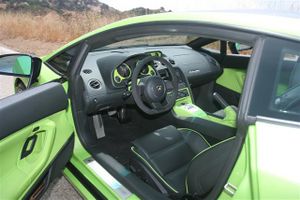 The Gallardo SE comes with a two-tone interior. All piping and stitching on the ultra-quality leather are executed in the same color as the bodywork of the car. The mid sections of the seats are finished in color-coded upholstery and even the black floormats have a color coded borders.

A rear-view camera is also standard issue on the Gallardo SE, as is a multimedia system and a navigation system. The sport suspension and an exclusive cover also came with the car but there are still several other options available, like the E-gear, which featured a 'thrust' mode to offer even more impressive acceleration by improving the gearchange through the different gears.

This "thrust" mode automatically revs the car to 5,000 rpm, drops the clutch engaging all four wheels in a controlled burnout, and ensures the car performs maximum acceleration. This "launch" only requires the driver to engage the "thrust" mode and step on the gas pedal, similar to the launch technology in pre-2008 Formula 1 race cars.

The Gallardo Nera (Special Edition) was introduced at the Paris Motor Show. The Nera has a top speed of 315 km/h (196 mph), and it accelerates to 100 km/h (62 mph) in 3.9 seconds, as the engine and drivetrain are identical to the standard Gallardo. The car is meant to showcase the customization options available to the customer in the Ad Personam program. The Nera features special matte black body panels, and is only available in black -- actually a combination of Nero Serapis and Nero Noctis. Brake calipers are painted a special silver, and the taillights are smoked to match the darker paint scheme. The interior is stitched from high-contrast black and white leather in the Q-Citura (lozenge shaped) fashion. Only 185 units of the Gallardo Nera were produced and 60 were destined for the American market. Note that the glass engine cover remained an option, even on the Nera. 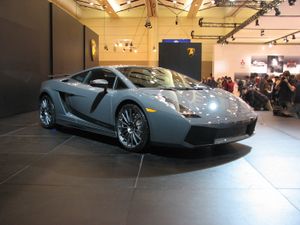 A special version of the Gallardo, dubbed the Superleggera, was launched at the 2007 Geneva Auto Show supposedly in preparation for the next Ferrari 430 Scuderia. The Superleggera is lighter than the base Gallardo by around 70 kg (154 lb) - down to approximately 1,360 kg (3,000 lb) - thanks to the use of carbon fibre panels for the rear diffuser, undertray, the rearview-mirror housings, the interior door panels, the central tunnel, and the engine cover. Even the wheel nuts are made of titanium instead of steel to save even more unsprung weight at each corner of the car. According to the original Press Release issued by the factory the superleggera was available in four colors only : Midas Yellow, Borealis Orange, Telesto Gray and Noctis Black, however at least one white Superleggera has been built.

The intake, exhaust and ECU have been upgraded to release an extra 10 hp (7.5 kW) for a total of 530 hp (395 kW). The lightening and extra power result in a 0-100 km/h time of 3.8 seconds, 0.1 seconds faster than the base Gallardo. The 6-speed e-gear transmission, usually a US$ 10,000 option, now comes as a standard. The full price for a Superleggera with everything on it runs for over $200,000. Lamborghini began offering the Gallardo Superleggera in June 2007.[4] In March 2008, Lamborghini announced that they had ceased production of the Gallardo Superleggera.[5]The Superleggera paid tribute to the first Lamborghini production model, the famous 350GT, which was designed and built by the Carrozzeria Touring Superleggera in Milan, a coachbuilding company that recently restarted its activities. 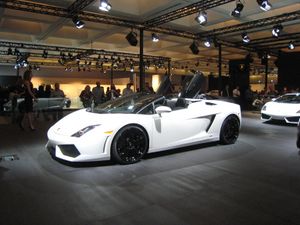 The Lamborghini Gallardo LP560-4 was revealed at the 2008 Geneva Auto Show. It is powered by a new 5.2L V10 with FSI direct injection, generating 560 PS (410 kW) and 398 ft·lbf (540 N·m) of torque. The engine is heavily based on the new Audi RS6 V10.[6][7] Unlike the precedent engine, this engine no longer has split crankpins, so it is not even firing, but Lamborghini says that due to the stiffer crankshaft it has less vibrations than the previous engine.[8] Also, a revised transmission and four wheel drive system as well as a 20 kg (44 lb) weight loss are expected. The 4 at the end of the name refers to the Gallardo's permanent four-wheel-drive system. It also incorporates a new front bumper influenced by the Lamborghini Reventón. Pricing of the Gallardo LP560-4 will start at around US$222,000. [9]

The series will debut in May 2009 featuring the Lamborghini’s Super Trofeo, a lightweight version of the Gallardo LP 560-4 sports car. The Super Trofeo will come with a reworked chassis and a power output of 419 kW (570 hp) from its V10, ‘Iniezione Diretta Stratificata’ engine. Lamborghini has the objective to make the Super Trofeo is the fastest one-make series in the world.

The race car will feature Lamborghini’s permanent four-wheel drive, making the Super Trofeo the only one-make, all-wheel drive motorsport series. Lamborghini will build cars for a 30-strong grid, available to individual professional and ‘gentleman’ drivers, as well as Lamborghini dealer teams. One factory car, reserved for celebrity ‘guest drivers’, will be included in the line-up at each round.

The first race weekend of the 2009 provisional calendar will run on 3 May at the Silverstone circuit in the UK, followed by Adria in Italy on 17 May, Nuremburg’s Norisring in Germany on 5 July, Spa in Belgium on 2 August, Barcelona’s Circuit de Catalunya in Spain on 20 September and culminating on 4 October in Paul Ricard, France. Swiss watch-maker Blancpain is the title sponsor and the series will run over European race weekends alongside other prestigious series such as the FIA GT Championship and DTM.

The Super Trofeo car is offered at 200,000 euros plus tax, via Lamborghini dealerships, with support and parts sales trackside. The prestigious Super Trofeo Village will provide a hospitality area in true Lamborghini style, for drivers, sponsors and guests. 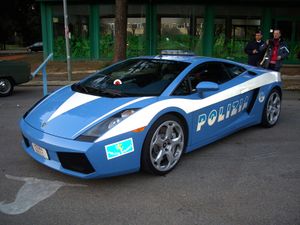 In December 2004, two Gallardos were donated to the Italian police in honour of the force's 152nd anniversary, one came from Automobili Lamborghini SpA while a second was donated by an independent organization.

The Gallardo Police Cars are used by the traffic police (Polizia Stradale) during emergencies and alarm situations on the Salerno-Reggio Calabria highway, also under the powers of the special safety operative which is already being employed along that tract of highway and above all, for the transport of body organs destined for transplantation.

On October 2008, a private ceremony was held at the Viminale Palace where Automobili Lamborghini S.p.A. donated the newest Gallardo, the LP560-4 ,to the head of the Italian State Police, Prefect Antonio Manganelli. The new Lamborghini Gallardo LP560-4 Polizia will replace its predecessor to fulfill roles with the Lazio Highway Police Department.[12] 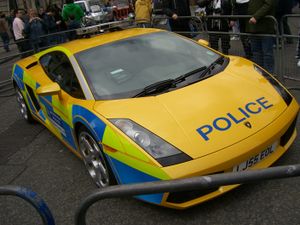 Yellow Gallardos have been "temporary" police cars for the Metropolitan Police in London, one in 2005 and one in 2006, for specific publicity events. The 2006 vehicle was seen at the start of the 2006 Gumball Rally. Both vehicles were lent by Lamborghini London and were fitted with yellow and blue Battenburg markings, police logos and a small blue lightbar.