The Lamborghini Jalpa (Spanish pronunciation: ['xalpa]) was a sport car produced by the Italian automaker Lamborghini from 1981 to 1988. The Jalpa was a development of the earlier Silhouette, but was rather more successful; a total of 420 examples were sold. The Jalpa was intended to fill a role as a more "affordable" Lamborghini, being much cheaper than the Countach. Instead of the big car's V12, the Jalpa was fitted with a transversely-mounted 3.5 litre V8 that developed 255 hp (190 kW). The bodywork was designed and built by Bertone. 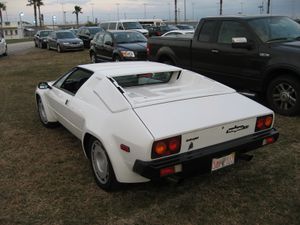 The name Jalpa came from a famous breed of fighting bulls, Ferruccio Lamborghini having a liking for bulls and being a Taurus he gave most Lamborghini cars bullfighting-related names.

Compared to the Countach, the Jalpa was much easier to drive, having better visibility and being more tractable in heavy traffic and at slow speeds. At night, however, there were many distracting internal reflections (a common curse of the Italian low-volume car).

Originally the plastic components (bumpers, air intakes and engine cover) were black, and the car carried over the rectangular taillights of the Silhouette. In 1984, however, round taillights were fitted.

In 1988, after falling sales, the new owners, Chrysler, decided to end Jalpa production.

Following the Chrysler takeover Lamborghini product programs general manager Jack Stavana fitted a Jalpa V8 into a Dodge Daytona, linked to an AWD system designed by Carroll Shelby and called it the "Decepzione". Despite its performance, the project was never followed up due to the car having just 1.5 inches (38.1 mm) of ground clearance, necessitated by the comparatively tall engine block.