The Lamborghini Miura is a sports car built in Italy by Lamborghini between 1966 and 1972. A mid-engined layout had been used successfully in competition, including by the Ford GT40 and Ferrari 250 LM at Le Mans. De Tomaso had produced a road car with this layout, the Vallelunga, but otherwise cars designed for the road were almost uniformly front-engined, rear drive vehicles. The Miura was a trendsetter, the one that made the mid-engined layout de rigueur among two-seater high performance sports cars. It is named after the Spanish ranch Miura, whose bulls have a proverbial attack instinct.

Inspired by the Ford GT40 (now Ford GT), the Miura astonished showgoers at the 1965 Turin Motor Show where only the chassis was shown, with multiple orders being placed despite the lack of an actual body. Later, Marcello Gandini from Bertone, who would later go on to design many of Lamborghini's cars, was chosen to design the body. Both body and chassis were launched five months later at the 1966 Geneva Motor Show. It was a sensation, with its flamboyant bodywork and unusual engine and clam-shell opening hoods on both the front and rear of the car. There was a small trunk located in the very rear of the tail behind the engine.

Taking a cue from the Mini, Lamborghini formed the engine and gearbox in one casting and they shared common lubrication until the last 96 SVs, which used a limited slip differential requiring appropriate oil.

It has been reported, but not confirmed, the first 125 Miuras were built of 0.9mm steel and are therefore a bit lighter than later cars. All cars had steel frames and doors with aluminum front and rear skinned body sections.

The P400S Miura, also known as the Miura S, made its introduction at the Turin Motorshow in November 1968, where the original chassis had been introduced 3 years earlier. It was slightly revised from the P400, including newly added power windows, bright chrome trim around external windows and headlights, new overhead inline console with new rocker switches, engine intake manifolds made 2mm larger, different camshaft profiles, and notched trunk end panels (allowing for slightly more luggage space). Engine changes were reportedly good for an additional 20 PS (20 hp/15 kW). Other revisions were limited to creature comforts, such as a locking glovebox lid, reversed position of cigarette lighter and windshield wiper switch, and single release handles for front and rear body sections. Other interior improvements was the addition of power windows and optional air conditioning was also available for $800. Less than 30 cars were fitted with Air Conditioning. About 338 P400S Miura were produced between December 1968 and March 1971. 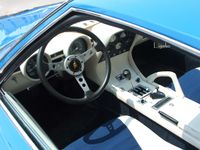 The last and most famous Miura, the P400SV or Miura SV featured different cam timing and altered carbs. These gave the engine an additional 15 PS (15 hp/11 kW), to 385 PS (380 hp/283 kW). The last 96 SV engines included a limited slip differential which required a split sump. The gearbox now had its lubrication system separate from the engine, which allowed the use of the appropriate types of oil for the gearbox and the engine. This also alleviated concerns that metal shavings from the gearbox could travel into the engine with disastrous and expensive results.

The SV can be distinguished from its predecessors from its lack of "eyelashes" around the headlights, wider rear fenders to accommodate the new 9-inch wide rear wheels and Pirelli Cinturato tires, and different taillights. 150 SVs were produced. One SV was owned by Frank Sinatra.

There was a misprint in the SV owners manual indicating bigger intake valves in English size (but correct size in metric). The intake and exhaust valves in all 4 liter V12 Lamborghini remained the same throughout all models. This intake size misprint carried forward into Espada 400GT and Countach LP400/LP400S owners manuals as well.

This one-off Miura (#5084) was the development of Lamborghini development driver Bob Wallace in 1970. The 'Jota' is the Spanish letter of 'J'. The 'J' designation represented the FIA's Appendix J racing regulations for which the 'Jota' was to conform. Only one was built, initially as a powerful test mule for future Miuras. Lamborghini sold the car after extensive testing. In April 1971, the car crashed and burned on the Brescia Ring Road.[1]

Once customers heard about the Jota, they requested their own "Jota". Lamborghini could not justify the expense of building a series of Jotas, so they offered an upgraded SV model instead. This model, known as the SV/J, featured upgrades to the engine, suspension components, exterior and interior.

Of the five examples of the Miura SV/J built by the factory while the Miura was still in production, two were built new (chassis #5090 and #5100) and three were converted from existing SVs (chassis #4934, #4860 & #4990). All of these still exist. Chassis #5100 is however the only SVJ to feature the dry sump lubrication system as per the mechanics of the original Jota #5084.

One of these cars, chassis #4934[2], was built for the Shah of Iran Mohammad Reza Pahlavi. The Shah stored this car under armed guard with another SV in Royal Palace in Tehran. After he fled the country during the Iranian Revolution, his cars were seized by the Iranian government. The SV/J was sold into Dubai in 1995. In 1997 this car was sold via a Brooks auction to Nicolas Cage, at US$490,000, becoming the model's highest ever price sold in an auction.[3] Cage sold the car in 2002.

A sixth SV/J was built at the Lamborghini factory between 1983 and 1987 from an unused Miura S chassis. This was made for the brother of Patrick Mimram, then owner of Lamborghini.[3]

Further Miuras were subsequently upgraded to SVJ specifications (trying to imitate the real factory SVJs) by various garages of Switzerland, USA and Japan.

Another one-off, the Miura Roadster (actually more of a targa-model, but without any removable roof) was built by Bertone as a show car. Based on a P400, it was first shown at the 1968 Brussels Auto Show. After having been exhibited at several auto salons the car was sold to the International Lead Zinc Research Organization (ILZRO) who turned it into a display-vehicle showcasing the possibilities of using zinc alloys in cars. The car was named the ZN75. A few other Miuras have had their tops removed, but this Bertone Miura Roadster was the only factory open-top Miura.

In 2006 the ZN75 was purchased by New York City real estate developer Adam Gordon. Gordon had Bobilff Motorcars in San Diego, California return the car to its original Bertone Roadster form. The restored car was first shown in August 2008 at the Pebble Beach Concours d'Elegance.

This version of the Miura was actually displayed in 1981 at the Geneva Motor Show by Lamborghini, shortly after the new CEO Patrick Mimran took over the factory. The car was actually the yellow Miura S presented at the 1971 Geneva Motor Show, reconstructed in 1980 in Spider by the Swiss Lamborghini Importer, Lambomotor AG. The Miura SVJ Spider was displayed on the Lamborghini stand with the other 1981 new models (Jalpa and LM002), equipped with wide wheels and a rear wing, in the context of the marque's revival, it was considered as a prototype for a possible limited series of Miura Spider. This car has therefore undergone numerous modifications / upgrades by various marque specialists. It does however remain a simple Miura S, such as presented at the 1971 Geneva Motor Show.

Early Miuras were notorious for being a fire hazard. The problem was caused by Lamborghini's decision to use Weber 40 IDL 3C1 carburetors which were designed exclusively for racing applications and weren't suitable for road use. The problem occurred when the car sat idling (e.g. at a stoplight); the area above the throttles filled with fuel which often ignited when the car accelerated away from the stop. One of Lamborghini's engineers devised a modification for the carburetors which created a fuel-return. Ferrari, who used these same carburetors in one of their cars, and suffered the same problems, were able to use Lamborghini's modification to solve it.

Some other interesting details: the position of the fuel tank is at the front causing the vehicle to have less weight at the front as the fuel tank gets lighter (closer to empty), thus making the car more difficult to handle at more than 240 km/h (149 mph). Another detail is that the doors resemble a bull's horns when it is opened wide (Lamborghini's logo itself depicts a raging bull).

A Lamborghini Miura concept car was presented at the Museum of Television & Radio on January 5, 2006 alongside the Los Angeles Auto Show, though it was not present at the show itself. Instead, the Miura officially debuted at the North American International Auto Show two weeks later. It was the first design by new Lamborghini chief, Walter de'Silva, and commemorates the 40th anniversary of the 1966 introduction of the original Miura in Geneva.

Lamborghini president and CEO Stephan Winkelmann has denied the concept will return the Miura to production, saying “The Miura was a celebration of our history, but Lamborghini is about the future. Retro design is not what we are here for. So we won’t do the Miura.”[4]

7. The Lamborghini Miura Bible, written by Joe Sackey. Published by Veloce Publishers, December, 2008. The only complete resource on the model, and the only book published within the last 26 years. A complete guide to all variants of the Miura, including the history of the model, as well as more than 400 historic and stunning studio shots. http://www.veloce.co.uk/shop/products/productDetail.php?prod_id=V4196&prod_group=Motorsport&