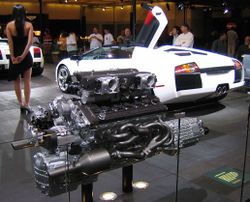 Lamborghini 6.2-liter V12 engine displayed, with the Murciélago roadster in the background

The Lamborghini Murciélago is a high performance sports car produced by Italian automaker Automobili Lamborghini S.p.A. and designed by Luc Donckerwolke. It was introduced in 2001 as the successor to the Diablo. The Murciélago is a two-door, two-seat coupé. To celebrate the company's 40 years in operation, 50 special edition Murciélagos were built during the autumn of 2003. An open-top version called the Murciélago Roadster was introduced in 2004 for the 2005 model year. The roadster features similar performance to the coupé with a more aggressive rear flank, as well as a considerably higher price tag.

The Murciélago sports a 6.2-litre version of the Lamborghini V12 engine, a six-speed manual or six-speed sequential automatic transmission, and four-wheel drive. It also has a rear spoiler that can be raised to an angle of 70 degrees, side mirrors that fold in to improve aerodynamics, and side scoops that automatically open to the needed size to let in just the right amount of air needed to cool its engine. The 2008 car's fuel economy is Template:Convert/mpgus city and Template:Convert/mpgus freeway, making it the least efficient 2008 car for city and highway driving, according to the EPA.[2]

In 2006 the Murciélago's engine was replaced by a stronger 6.5-liter engine and the car's name was changed to Murciélago LP640. For the 2007 model year Lamborghini did the same with the roadster model, which is now called Murciélago LP640 Roadster. Both versions received a minor facelift.

The name Murciélago (pronounced moor-thee-EH-la-go in traditional Castilian Spanish and moor-see-EH-la-goh in Spanish of Latin America) means "bat" in Spanish. A bull by this name survived 24 sword strokes in an 1879 fight at the arena of Córdoba, and fought with such passion and spirit that the matador chose to spare its life, a rare honor. In another Lamborghini tie-in, the bull was later presented as a gift to Don Antonio Miura, who was a noted breeder and whose bull ranch the Lamborghini Miura was named after, and went on to sire a line of famous fighting bulls.

The LP640 version was first shown at the Geneva Motor Show in March 2006, as a facelift for the coupé version. It features a 6.5 Litre engine, now producing 472 kW (Template:Convert/PS bhp), improving performance substantially. Like the base Murciélago, the engine is mounted "backwards", with the transmission in front of the engine and the differential behind it, instead of a transaxle normally seen on mid-engine cars. There were also a few minor external changes, primarily to the low air intakes.

The front and rear bumpers have been reshaped to channel air more efficiently, and the new exhaust has been shaped into the rear diffuser to minimize aerodynamic lift. The air intake on the left side has been enlarged to accommodate the feeding of the oil cooler. The car's body is made up of steel and carbon fibre, while underneath a revised suspension has been added to keep up with the car's performance. It also has an all-wheel-drive system that normally distributes 70% of the torque to the rear wheels, but can allocate up to 100% to the rear, or up to 70% to the front, depending on where the available grip is. There are also new 18-inch (460 mm) Hermera alloy wheels running huge 335/30 tyres at the rear. The LP640 retains the original car's scissor-opening doors. The LP640 coupè U.S. MSRP rests at $318,800.

Inside the LP640, the seating has been reshaped to accommodate greater headroom, while an upgraded instrument panel is flanked by an improved stereo system.

A special edition version of the Murciélago LP640 was introduced at the Paris Motor Show. The Versace edition features a customized all-white exterior and a matching white interior. However, a one-of-a-kind black LP640 Versace and LP640 Roadster Versace were also presented by the factory.[3]

LP stands for Longitudinale Posteriore, referring to the longitudinally-mounted, 6.5 L V12 engine, capable of producing up to 472 kW (Template:Convert/PS bhp) at 8000 rpm. Along with a new six-speed manual transmission, which can come in Lamborghini's optional paddle shift "E-gear" package, the LP640 can go from 0 to 100 km/h (62 mph) in just 3.3 seconds: 0.4 of a second quicker than the previous Murciélago, and reach a top speed of 219+ mph. The LP640 is accommodated by an electronic Launch control device called "Thrust."

The new Lamborghini Murciélago LP640 Roadster was presented on the 2006 Los Angeles Autoshow. It features the same engine as the LP640 coupé and replaces the 6.2 Litre Murciélago Roadster. The only design changes were oil cooling vents behind the air intakes, interior changes, and a reinforced body.

LP640 Versace Edition at Toronto Autoshow 2008, with the white-black trim in the door

Presented at the 2008 Paris International Autoshow, the Lamborghini Murciélago LP640 Versace is a special edition version of the Lamborghini LP640 Coupé, with all the same performance features. The only difference is the two tone white-black trim, shown on both the exterior and interior of the car. However, Lamborghini de Spa have also built 1 black LP640 & LP640 Roadster. It also features custom Versace leather seating and a Gianni Versace logo plaque inside the vehicle.[5] The Versace material costs $10,000 per seat. Lamborghini have also announced that they will only produce 20 units of this model.

In late 2003, Lamborghini announced a special 40th Anniversary Edition of the Murciélago, following in the footsteps of their Countach and Diablo Anniversary Editions. The limited production run of 50 vehicles featured enhancements including a limited-edition body color, carbon-fiber exterior detailing, upgraded wheels , a new revamped exhaust system, and a 40th Anniversary numbered plaque displayed along the side. The interior featured a new leather trim and additional electronic features.

The Lamborghini Murciélago R-GT is a race-only version of the Murciélago, developed jointly with Reiter Engineering and Audi Sport. It has rear-wheel drive unlike the standard Murciélago to comply with the FIA, ACO, and JAF rules. The car retains the standard Murciélago V12, but has air restrictors to manage power. Its acceleration and top speed are highly dependent on the gearing selected for a particular race track.

In March 2006 at the Super GT Suzuka 500 km, a Murcielago R-GT specifically built for Super GT (and rebadged RG-1) for the Japanese Lamborghini Owners Club (JLOC) recorded the first win ever for a Murcielago when they earned a win in the GT300 class. In March 2007 in the FIA GT Championship, the All-Inkl.com Racing Murciélago won the Zhuhai 2 Hours.

Cars Based on the Murcielago

A Lamborghini Miura concept car was presented at the Museum of Television & Radio on January 5, 2006 alongside the Los Angeles Auto Show, though it was not present at the show itself. Instead, the Miura officially debuted at the North American International Auto Show two weeks later. It was the first design by new Lamborghini chief, Walter de'Silva, and commemorates the 1966 introduction of the original Miura in Geneva.

Lamborghini president and CEO Stephan Winkelmann has denied the concept will return the Miura to production, saying “The Miura was a celebration of our history, but Lamborghini is about the future. Retro design is not what we are here for. So we won’t do the Miura.”[8]

Lamborghini's own Reventón is a mid-engined sports car that debuted at the 2007 Frankfurt Auto Show.[9] The official press release states that only 20 will be built. The exterior styling was inspired by the F-22 Raptor. Although the exterior is partially new, almost the entire mechanics (including the engine) are taken directly from the Murciélago LP640.