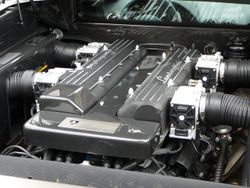 There are many versions of the story of its development - some say it is derived from a Honda Formula One design, others say that Giotto Bizzarrini borrowed heavily from his own F1 design. Both were 1.5 litre V12 racing engines and the Lamborghini unit has similarities to both.

In any case, when Ferruccio Lamborghini set out to provide Ferrari with competition, he contracted Bizzarrini to design the engine for his car and, according to some accounts, paid him a bonus for every horsepower over what Ferrari's V12 could produce. The finished product was such that, with minor modifications and improvements, the very same engine (in 6.5 litre form) powers the current V12-engined Lamborghini Murciélago LP640, and is estimated to finish its service for Lamborghini with the coming version of the Murcielago, the Murciélago SV [1].

Over the years, the engine has nearly doubled in displacement, seen the modification of the heads to allow four valves per cylinder, the replacement of carbs with electronic fuel injection and the replacement of a wet sump lubrication system with a dry sump. However, the engine that powers the current Murciélago can trace its lineage directly to the F1-inspired design of Bizzarrini and his team more than forty years ago.